Day #2 in Erie:  Laszlo steps into the Championship Ring for the first time where he was rewarded with a Major Win and Win Over Champion towards his Grand Championship.  This makes Laszlo’s 5th Major Win in a row at 13 months.

Meanwhile….Brother Luther brings his “A” game in the Class, steps right up behind Brother Laszlo to be rewarded with Winners Dog/Best of Winners for his 2nd Major toward his Championship!  What beautiful, balanced, solid, well-moving, bomb-proof Dogues.

These wonderful boys and their families make us so proud!  Laszlo heads back home to Eastern PA after a few weeks at “Camp Grandmas” for some shows – and was well-received and spoiled as a new Champion when he returned.  Particularly a great birthday for Joy spent cuddling, watching movies and sharing snacks all day with him.  We enjoyed him so much, our special time with him, many thanks and congratulations Cushing family! 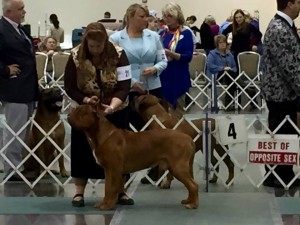